Pin It
You are here: Home / Book Reviews / Fiction / Adventure / The Pig Wars 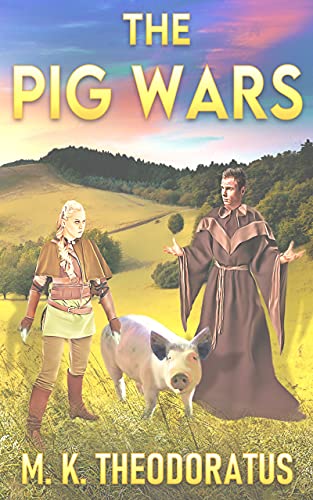 After inadvertently causing her father’s death with her magic in battle, Lady Rena avoids the political in-fighting among the Half-Elven of the Marches. She spends her days weaving and managing her lands, trying to heal from the trauma. But this fragile peace frays…

Renna’s neighbor, Lord Gorsfeld, has plans for the retiring young woman. As the richest man in the Marches, but one without magic, he decides to woo Renna to gain control of her magic and her lands, by setting himself up as a strong protector, who can save her from the marauders who harass her border villages. However his campaign goes awry when Black Tail, Renna’s pet pig, injures dumps him in the mud.

Gorsfeld intensifies his vandalism, hoping to scare Renna into his arms. Renna must fight to protect her people without angering the Lord High Commander of the Marches who expects his childhood friend to help him keep the peace. But she is caught off guard and is forced to ue forbidden elf-fire to protect her people.

Renna discovers she must fight for her life.

Author M.K. Theodoratus offers a stunning and captivating fantasy novel that will have audiences on the edge of their seats in “The Pig Wars”. This compelling and intriguing book is unique in its beautifully-crafted world, fascinating characters, and a fast-paced story line that is both fantastical and political. “The Pig Wars” is an absolute must-read that fantasy lovers won’t want to miss!

M.K. Theodoratus Fantasy has been part of my life since I can remember, starting with a fantasy playmate who kept me company while I was locked on the front porch with my toys. My brother, Jerry, still hasn’t forgiven me for naming my friend Jerome. Yeah, my mother was a copycat.

My formal introduction to fantasy came with the discovery of the Oz books. I read every one I could find, even if they were larger than the other books brought to our school from the library. I became a serious book buyer when I discovered my dad’s army/navy store sold used paperbacks, including authors like A. L. Merritt, Andre Norton, and C. L. Moore–plus my favorite of favorites Leigh Brackett. [Too bad, the real Mars isn’t as romantic as hers. Survival on Mercury, anyone?]

Now, I write fantasy about snarly elves, the Half-Elven of the Far Isles, or humans fighting invading demons in Andor.

I’m doing very little social media stuff at the moment, but I do have a website at www.mktheodoratus.com. But you can find me on Facebook, Pinterest [I’ve got a great collection of Gorey pics], and Twitter.