Once I started reading the book, I couldn’t put it down. I was also abused as a child and this book relates to all victims of physical and sexual abuse. It is a hard read and will make you cry but the world must know what goes on behind many closed doors, maybe that way we could stop these crimes from happening. Thank you for doing this. – Amazon Review 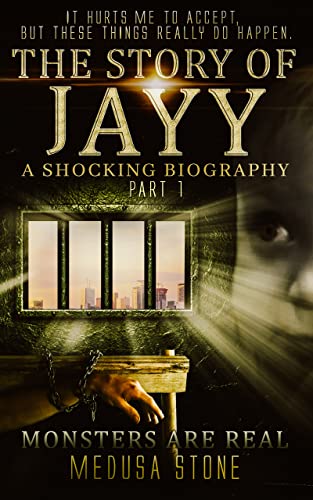 This book narrates the heartbreaking account of one of the most shocking cases of child abuse and sexual exploitation in the history of the United States.

The Story of Jayy tells the nightmare of a young boy and his 2 older brothers, tortured and sodomized by their own father, a powerful gentleman in society, and a vicious monster behind closed doors.

After his mother’s death, all Jayy could remember was his father’s loving face and his comforting presence, but all of this changes one night, when the man he idolizes walks into his room, taking his innocence and changing his life forever.

Constantly beaten, starved, and trained to serve, Jayy and his brothers are forced to sexually interact with each other, their father, and those from the darkest circles of society.

Book 1 focuses on Jayy’s early years and his initiation to the horrors of trafficking.

“A book like this is hard to read, it was hard to write too, but this is important, because it’s real! The world is ready to know about the kind of horrors that could be in any neighborhood, happening to any school child. My hopes in writing this book is to not only raise awareness, but to also help Jayy, a young man whom I’ve had the utmost pleasure of meeting. All proceedings from this book will go to freeing him and others like him… are you ready to make a difference?”

Medusa Stone is a novelist and poet born in Spain, winner of the Humanitarian Literary Award, international blogger and journalist.

Passionate and driven by the defense of human rights, she moved to the United States in the year 2000, where she became an advocate against human trafficking, author and fervent activist against sexual exploitation and slavery.