Pin It
You are here: Home / Book Reviews / The Tragic Life of A Black LA Cop

Easy to read yet hard to forget. Joe Jones brings you a hard hitting account of a Black Cops journey on the Police force in Los Angeles and his betrayal by the system that is supposed to “uphold the law” and “Protect & Serve”. – Amazon Review 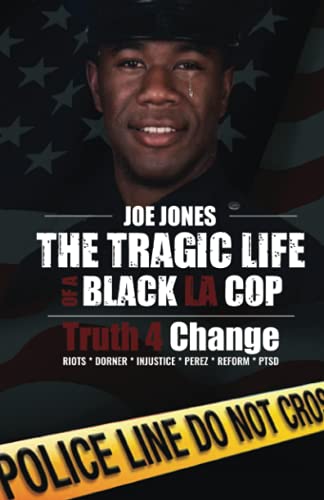 The Tragic Life of A Black LA Cop:
Truth 4 Change

It took Joe Jones 20 years to write this book. The Emotional Pain and Nightmare of being an Officer would not allow him to endure the Reflection needed consistently.

Jones was finally able to complete it after many killings of innocent Blacks at the hands of Law Enforcement, as well as the recent obvious Racial Disparage of Equal Justice in America witnessed by the World with the Insurrections of the U.S. Senate Building by Trump supporters. The Book Burned his conscious again and was able to finish.

This book is the Bible of the Crippling Circumstances a Black Police Officer can experience during a Law Enforcement Career. The Author through honest testimony has chronically depicted his life as a young man, through the Academy, and 8 1/2 years as an LAPD Officer before succumbing to PTSD caused by multiple tragedies, conspiracies, and Injustice during his career and years after as a Retired Officer.

Joe Jones is revealing his truth to hopefully once and for all get the conversation continued to Reform Police Departments across the Nation.

This was a very tragic story of how evil people can thwart the hopes and dreams of hardworking and loyal servants. If not told, corruption of this nature will inevitably continue.  -Amazon Review

Meet former LAPD law enforcement peace officer and author Joe Jones. Jones gives us a look into his life as an Adolescent Kid in the Hood until Today, as a Retired Officer. The Many Racially Charged Incidents will leave you hungry for the next, As Jones gives you play by play from a Black Policing Perspective. His Painful Career Experiences are provided for the World to Decide if there is a problem with-in the Culture of Police.