Pin It
You are here: Home / Book Reviews / The Weight of Salt

Only 99cents until January 30th.

I loved this book! The setting and details of immigrant life in Florida in the early 1900’s were so richly described. Miss Montanino infuses the story with interesting and unique Sicilian cultural beliefs, (I learned so much about the cigar industry) sayings, and superstitions. She creates a believable main character in Angelina, that I was so invested in her hopes and dreams, and felt let down each time they were thwarted by tradition. This story is gritty as well as beautiful. I can’t wait for the next book in the series!     -Amazon Review 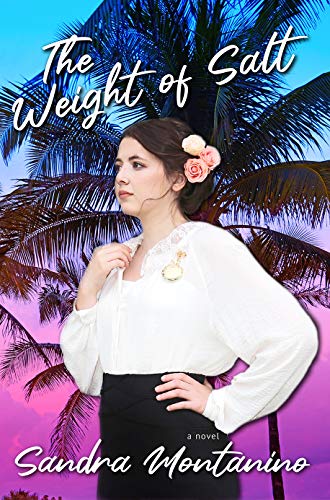 The Weight of Salt:
A Gripping Story of Love and Courage.

THE WEIGHT OF SALT A Gripping Story of Love and Courage. It is 1906, and fifteen-year-old ANGELINA PIRRELLO is devastated by an unexpected and startling event that will forever alter the course of her life.

Known as the Cigar Capital of the World, an influx of immigrants arrives in Ybor City, Florida seeking work, the Suffragettes are in an impassioned battle for women’s rights and the early mafia, known as the Black Hand, makes their presence known as they attempt to gain a stranglehold on Angelina’s Italian community.

Despite Angelina’s determination to improve her life, she is forced into menial labor. Believing her circumstances could not become more difficult; a raging fire erupts at her factory. It is at this moment of panic when she has a chance encounter with a young man who swiftly captures her heart. But through a series of circumstances out of her control, her joy is shattered and further complicated when her strict, old-world Sicilian father, who instills rigid family traditions, announces he has arranged her marriage to a man she dislikes. Frantic, Angelina finds herself at a crossroads and must make a daring move and risking everything she has ever known.

Sandra Montanino, a member of the League of Utah Writers has won numerous awards for her short stories. Her first novel, THE WEIGHT OF SALT won The Outstanding Fiction Award at the Southern California Writer’s Conference. Recently published, it’s a historical romance that takes place in the early 20th century and is inspired by the life of her grandmother Angelina. It weighs heavily on the Italian immigrant expression and introduces the reader to the world of Italian culture, their ancient beliefs, and superstitions. It also opens the door to the tragedies, hunger, and suffering and their powerful ‘yearning to breath free’ and determination to come to America.

Sandra lived in three different countries by the time she was eight. This unique exposure to new cultures, surroundings, and languages, and her family’s propensity for storytelling all contributed to igniting her imagination at an early age.

She is currently finishing the second book in her series.