Pin It
You are here: Home / Book Reviews / To Be Enlightened

“To Be Enlightened” was a life-changing book for me. Through the clever use of fiction, it made me think deeply about what it means to find enlightenment. It’s the story of a marriage and all the complications of partnerships. What happens when you and your partner don’t develop spiritually at the same pace? How could that even be expected? … I think what made this book especially powerful for me was that it wasn’t a “how to.” It was an engaging story that taught me a lot. Very subversive. I highly recommend it. – Amazon Reviewer 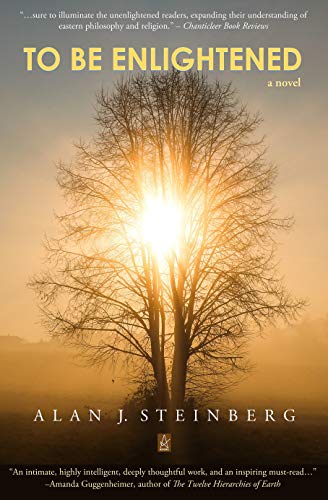 To Be Enlightened is a cosmic love story that follows Professor of Philosophy Abe Levy as he grapples with what it means to love both his wife, Sarah, and the ocean of silence within. It is also an intellectual exploration of the most intimate of subjects: our consciousness.

Abe Levy’s long tenure as a philosophy professor has motivated thousands of students to ponder age-old questions in light of New Age ideas. Though Abe is passionate about his teaching, he is obsessed with a powerful childhood dream of heaven. To return to that heaven, he must reach enlightenment in his lifetime. Day after day, Abe settles into deep meditation, reaching the very cusp of his goal but unable to cross the threshold. Desperately, he commits to doing whatever it takes, even if it means abandoning his wife for a more ascetic life-a decision that sets off a cascade of consequences for Abe, Sarah, and those he loves the most.

Alan J. Steinberg, MD is board-certified in Internal Medicine and practices with the Cedars-Sinai Medical Group in Beverly Hills, California. He also serves as one of the attending physicians for the NBA’s Los Angeles Clippers. He grew up in Las Vegas, Nevada, where he learned Transcendental Meditation (TM) in 1975.

Earning his undergraduate degree at Pomona and Pitzer Colleges in Claremont, California, he went on to attend the University of Nevada School of Medicine, receiving an MD degree in 1984.

His first book was a non-fiction consumer’s guide, The Insider’s Guide to HMOs (Plume/Penguin), which garnered favorable reviews in the Los Angeles Times and other publications as well as appearances on The Today Show, 20/20 and C-Span. The book helped sway the direction that healthcare was heading in the late 1990s.

His debut novel, To Be Enlightened (Adelaide Books, 2021), is a work of visionary fiction, inspired by some of his own experiences as a lifelong practitioner of TM. Dr. Steinberg lives with his wife of over thirty-five years in Los Angeles, California. They are the proud parents of three young adults.

Professor Abe Levy has been looking for enlightenment since he first discovered Transcendental Meditation. As he contemplates his life and relationships, he feels the need to attend a meditation retreat in Iowa to further his goal of achieving enlightenment but his wife Sarah is not keen on the idea. She needs him around so that she can overcome her panic attacks. Luckily, before Abe makes his decision to travel, he experiences the enlightenment and cosmic consciousness he’s been seeking. But the unique feelings and sensations he’s having make him aware that his college students may notice he’s different. What would happen if they report this back to the college administration? Then unexpectedly, his sense of enlightenment disappears, and he wants to do whatever he can to experience re-enlightenment. But what happens if his wife is able to do so before he does?

It was a pleasure to read To Be Enlightened which was both clever and appealing. I love how the book’s character mentions he wants to write a novel about Vedic teachings that will be both entertaining and informative, just as the author did. The descriptions of Abe’s cosmic consciousness were terrific, as was the way the author took the Vedic principles and incorporated them into the story. The most memorable one is where Abe discovers his Self and is able to describe his multi-dimensional world, where he is watching himself and looking out at the world at the same time. The story of his relationship with Sarah and his college students was also well written. The tension he created between these different characters, mainly his unpredictable student Tom, and their difficulties made this story very engaging. The ups and downs Abe had in his relationship with Sarah were fascinating, and I loved how she was transformed within the story as well. Especially, since she was a character, I didn’t like or somehow couldn’t manage to feel a lot of empathy for, at the beginning of the story.

To my mind, this is the best kind of book. On the one hand, it’s a novel with a fun and delightful story. But it also covers the fascinating topic of Vedic thought and Transcendental Meditation that provides one with a lot to think about both during the story and afterward. I particularly appreciated how he was able to make Vedic thoughts and ideas applicable to the lives in the story but explain them in a way that all readers can understand. It was one of those books that I didn’t want to end.