Pin It
You are here: Home / Book Reviews / Water Drumming in the Soul

Ultimately “Water Drumming in the Soul” is about love and the forces that can separate lovers. It is an important novel in a time of racial division and the globalization of cultures.
—Burrit Sabin,  Chief Japanologist at the American Embassy of Japan, Tokyo 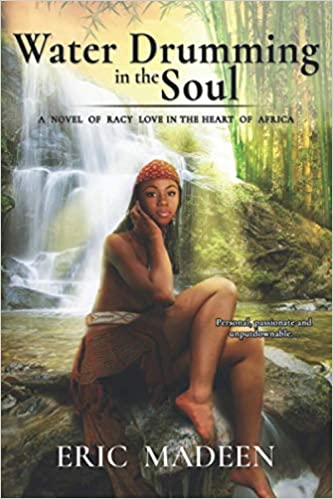 Water Drumming in the Soul:
A Novel of Racy Love in the Heart of Africa

Fall under the spell …“The light, filtered through canopy, had a cathedral glow….Vines, mosses, ferns, and orchids piggybacked on plants and trees, coating trunks with a furry green. A great hornbill, bulbous beaked and rainbow-colored, flapped in high forest, its giant wings wheezing as if prehistoric. Perched, it sang—a low susurrus like a humming …”

In this fiery tale set in steamy equatorial Africa, Peace Corps volunteer David Fields is on mission: to build a medical dispensary in a village where spells are cast on enemies and fear of a geek-shaman reigns. David seldom has his bearings – cultural or geographical – and must fight a cocktail of tropical maladies as well as social taboos as he throws himself into work.

Until… he meets Assam. Captivated by her water drumming, her playing the stream as a drum, David is drawn to her early on and becomes the hunter captured by the game. And what a rollicking game of love it is – with a tension or excitement between them that never dissipates, … until the haunting end.

Since early childhood reading and writing have been as natural to me as breathing so writing is something I have to do and getting this story out was a must. On that note, my experience as a Peace Corps volunteer in Gabon, Africa where I built a primary school complex in an equatorial village surrounded by rain forest, inspired me to write this multicultural, literary love story. The fictional reality resonates with the personal and passionate and hums in the reader long after the heart wrenching end.    — Eric Madeen

Eric Madeen is an award-winning author and an associate professor of modern literature at Tokyo City University and an adjunct professor at Keio University. His writing has been published widely – in Time, Asia Week, The East, The Daily Yomiuri, Tokyo Journal, Kyoto Journal, Mississippi Review, ANA’s inflight magazine Wingspan, Japanophile, The Pretentious Idea, several academic journals and so on.

Sharpened in then world’s largest ad agency for clients as diverse as Mazda and Sony (Sony No Baloney!) his prose allows for an immediate emotional entry into a sublime, exotic land. His two-plus years as a Peace Corps volunteer in Gabon, Africa, where he built a primary school complex in an equatorial village surrounded by rain forest, inspired him to write the multicultural love story Water Drumming in the Soul, which resonates with the personal and passionate. Originally from a Chicago suburb, he lives with his family in Yokohama.