Pin It
You are here: Home / Book Reviews / ZIHUATANEJO

This is a gripping story guaranteed to keep you guessing about what is to come next. It was especially enjoyable for me personally to read since I have visited Zihuatanejo several times and could easily live there if given the chance. The visits to Guatemala will definitely put you on edge, to say the least. Personally, my only complaint is that we don’t learn more about our hero’s journey. Mr. Bullard has indeed led an exciting and adventurous life. – Amazon Review 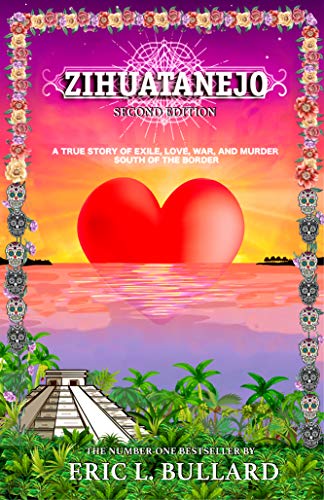 ZIHUATANEJO
a true story of exile, love, war, and murder south of the border

In the summer of 1994, I stuffed a swimsuit, a couple of paperback books, my passport and a stack of travelers checks into a small daypack and caught a one-way flight to Mexico. I was 36 years old without any real ties in the world, and I had a little money saved up in the bank. But most importantly, I was done with America: the hectic pace, the spiraling cost of living, and the same old routines and monotony. I wanted something different now, something new, something exciting and off the grid.

I had originally planned to go to Hawaii and live on the beach. But when a friend pointed out the high cost of living in Hawaii and the comparatively low cost of living in México, I quickly changed my plans and bought a one-way ticket to Puerto Vallarta. I wasn’t sure how long I was going to stay in Mexico. But once I got there, I ended up spending the next three and a half years living on the Pacific Coast in a small town called Zihuatanejo. During that time, my entire life completely changed as I dove head first into a country and culture of such diversity, excitement, violence, magic, and passion that still, to this day, I wonder at the meaning of it all.

Eric Bullard was born in Portland, Oregon. He studied Humanistic Psychology and meditation with Randy Revell, Deepak Chopra and Maharishi Mahesh Yogi. In 1985 he entered into a Hindu ashram where he spent the majority of next seven years studying Ayurveda and deep meditation techniques. In 1994 Eric moved to southern Mexico and Central America, traveling extensively throughout the region, spending most of his time in the Highland Mayan villages of southern Mexico and northern Guatemala, working and living with those tribes.

Leaving Mexico in 2005, Eric made a pilgrimage to the Indian and Nepalese Himalaya to continue studies in meditation, Hindu Philosophy, Ayurveda and Tibetan Buddhism. During the almost three years Eric was in the Himalaya, he lived, taught and studied in various Hindu ashrams and Tibetan Buddhist monasteries.

In 2014 Eric published his first book documenting the incredible experiences he had while living in a Hindu ashram studying deep meditation techniques. The much awaited second edition of that book was released in October of 2018. Eric now divides his time between Portland, Oregon, San Cristobal de las Casas, Chiapas, Mexico, and various other points around Central America and the globe where he continues his work, writing and studies.

Eric does not consider himself a spiritual teacher. He considers himself an explorer, an explorer in consciousness. He says this because he firmly believes that both Jacques Cousteau and Captain James Kirk of the starship Enterprise were wrong. It’s not the ocean, nor is it space that is the final frontier of human exploration. It’s the human mind, and even more so, the human soul, and how they both relate to each other and the outward personality to create the world we live in.