I really enjoyed it! The narration was great and kept me entertained! The author did a great job with the character builds and plot! This was my first book by this author but definitely not my last! I look forward to reading more books by this author! I was given a free review copy audiobook at my request and have voluntarily left this review. 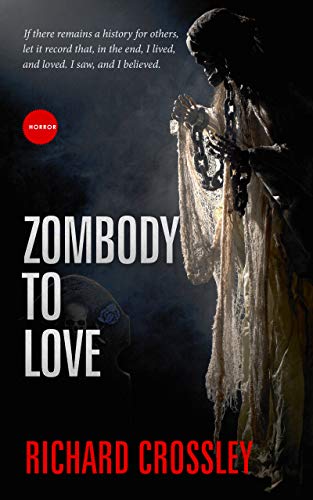 Zombody to Love
(Journal of the Semi-Dead Book 1)

When a contract enforcer for a drug kingpin steals a car and brutally murders a young couple in their home, he begins an epidemic that will turn half the world into flesh eating zombies and leave him Semi Dead!

AND HE’S THE HERO?

Tapper wasn’t always soulless. In fact, he was once a highly decorated member of special forces. That was before an IED planted a chunk of metal in his head. Worse, was when the doctors tried to remove it.

This story is about who he is after the operation.
The man forgotten by his country and abandoned by his friends.
The man the doctors say has lost his soul.

But he’s not bitter. In fact, he’s loving life. It’s so easy with his simple code and no moral values to weigh him down.

But he makes one little mistake.

The couple he kills isn’t on his hit list. Now, his employer has decided Tapper needs to “retire” and dispatches a second rate hitter with an overlarge head to send Tapper into permanent oblivion. Offended by the boss’ human resources representative, and the attempt on his life, Tapper takes the advice of his closest associate, Cootie, to use their employers money to fulfill his retirement dreams, but these simple plans are made more difficult with the whole zombie apocalypse problem.

With a nagging rash on his hands and the world quickly changing into a place where everyone you meet may be hungry for your flesh, Tapper and his only friend vow to take down the drug lord and his organization… If they can survive what Tapper may well have started with his little mistake.

Tapper himself is changing, and he’s not a damn bit sure he likes it. He’s beginning to care! It may be he’s even falling in love with the one woman that might be able to cure them all.

Horrorgeeklife says “ZOMBODY TO LOVE IS A HORROR COMEDY YOU CAN’T MISS!”

Kurt Marquart of Horrorgeeklife.com says “Crossley paints a gruesome picture without relying too heavily on red dye number 5. He tells a classic tale for modern readers who have an appreciation for old school situations. When Jack Napier said, “Murder is an art,” he may have been referring to Richard Crossley’s studies in accidental and premeditated death. His disturbingly detailed descriptions of the comedic ways some of his characters cross the plane into oblivion inspire literal LOLs and guffaws. And as zombie tales go, I’ve read too many to count. However, Zombody to Love is a new idea with its own lore on zombie “life” and reason. Well worth your time.”

Richard C. Crossley was born in the ‘dry’ heat of Phoenix, Arizona in the early 50’s and moved east with family when about 10. After serving in the marines during the Vietnam era, he met the love of his life and married her. 45 years later they are the parents of 5 wonderful children, 9 (so far) grandchildren, and soon, their first great grandchild.

Richard was always a storyteller, though writing and sharing came later in life. His first peer reviewed attempt at a screenplay was disastrous, being much too ‘novel like’. He learned the craft and eventually wrote a dozen screenplays, 2 of them under contract, though not as yet produced. Now he has determined to share his stories as novels, with the great hope that others might find them entertaining. Richard continues to love the process of learning and following dreams. He now lives with his beautiful wife and youngest son in Charles Town, West Virginia. He considers family his greatest achievement, love, and responsibility in life, and appreciates their support, patience, and inspiration in his efforts.

I often have free codes or other promotions, so if you’re looking for a free audio copy fill out the contact form and let me know.